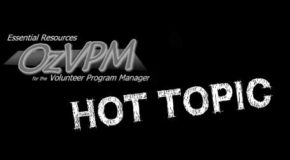 An interview with Steve McCurley

OzVPM HOT TOPIC – APRIL 2005 By OzVPM Director Andy Fryar with Steve McCurley This month we have decided to present another of our occassional interviews with prominent volunteerism leaders from around the world.