Are you a victim of the ‘niceness syndrome’ ?

OzVPM HOT TOPIC – MARCH 2004 By OzVPM Director, Andy Fryar I’d have to say that volunteer program managers are amongst the nicest people I know. Let’s face it – they are constantly dealing

Do we need a new title for volunteering???

OzVPM HOT TOPIC – FEBRUARY 2004 By OzVPM Director, Andy Fryar Over the past few months I’ve heard an increasing number of people comment that it was time we started to think about using

Confessions of a reforming workaholic

OzVPM HOT TOPIC – JANUARY 2004 By Guest Hot Topic author, Martin J Cowling Confess! How often have you: – Continued to check your e-mail well into your holidays? – Taken work calls on

OzVPM HOT TOPIC – DECEMBER 2003 By OzVPM Director, Andy Fryar Besides volunteerism, one of my greatest passions is surf fishing. It’s an activity I am happy to travel many thousands of kilometres to

Start the conference carousel – I want to get on!

OzVPM HOT TOPIC – NOVEMBER 2003 By OzVPM Director, Andy Fryar Anyone that knows me will be in no doubt as to what a strong advocate I am for the volunteering sector in the

The success is in the succession!

OzVPM HOT TOPIC – OCTOBER 2003 by OzVPM Director, Andy Fryar Let me begin this Australasian Hot Topic by sharing an experience I have witnessed unfold over the past few weeks. A colleague of

Breaking down the ‘grass ceiling’ of volunteerism

OzVPM HOT TOPIC – AUGUST 2003 By OzVPM Director, Andy Fryar A good friend of mine – a volunteer program manager – was recently successful in obtaining a new position. Anyone looking to create 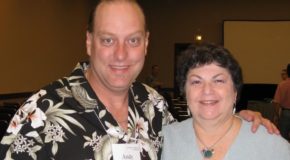 The world is a much poorer place today. Susan Ellis wasn’t merely a shining light ...

November 15, 2014, No Comments on A new online resource for volunteer managers

September 6, 2012, No Comments on Volunteer Managers Day is November 5

The world is a much poorer place today. Susan Ellis wasn’t merely a shining light ...

November 17, 2015, 6 Comments on Ten questions every VM should ask a potential employer!

September 19, 2015, No Comments on Are you a good volunteering parent?